Reshala, also known as "Dealmaker" is a Boss in Escape from Tarkov.

Reshala and his followers have different health values to PMCs and Scavs.

Reshala can be found on the map Customs and has four spawn points.

He will normally try to stay at the back of the fight and hidden from the player's view. Additionally, he never wears armor. Be careful as a player scav because Reshala and his guards are hostile to them if you get too close and will attack without provocation.

Following Reshala around are 4 heavily armed guards. These guards will typically carry modded AK's loaded with various ammo types including tracer ammunition, tier 2-6 Armor vests, and tier 3-5 helmets that sometimes have visors. Unlike regular scavs, these guards are highly aggressive and will frequently push towards the player instead of taking cover. The followers all have the last name Zavodskoy.

To kill Reshala first, the best tactic is to find him before being seen. He can be easily identified by his brown sweater, unlike his followers who wear blue jackets with white striped cuffs. After being spotted he will run behind his guards, forcing you to kill them first. Before spending time looting Reshala or his guards it's recommended that you kill all five of them as they will usually stay within close proximity to each other and will kill you while looting. The guards are very aggressive compared to normal scavs and will rush the player. When facing these guards be aware of their positions so you do not get caught off guard when they run up to you. Because the guards are frequently in close proximity to each other grenades can be highly effective at stunning or killing multiple of them at once, especially indoors. Be aware that they also have grenades and will throw both flashbangs and fragmentation grenades at you, even when you're out of their line of sight and hidden behind cover.

Note that the primary weapons and helmets can have numerous mod variations and those shown below are examples. 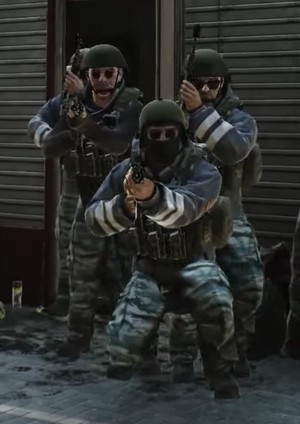