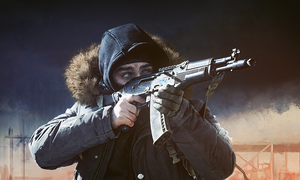 Shturman, a scav boss from the Woods map

Scavengers, also known as its shorter version, Scavs, are a faction in Escape from Tarkov. 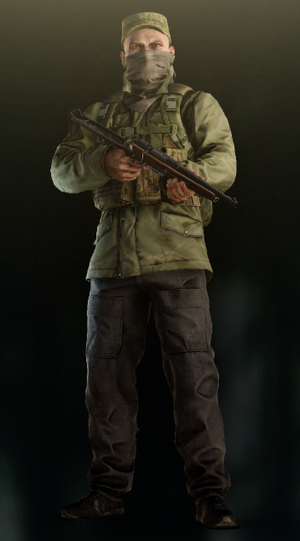 At the onset of active hostilities in the city, in addition to the predictable humanitarian consequences, a special trend is observed that represents a threat for both civilians and armed forces of the conflicting parties. Due to the tense situation in the city prior to the open conflict, Tarkov has developed conditions attractive for all kinds of criminals and antisocial personalities. In addition, the development of the underworld business, especially in recent years, has encouraged the formation of a certain population stratum previously not directly associated with criminals, but, due to their moral and ethical inclinations, prone to antisocial actions in certain cases concerned with their own benefit. Thus, at this point, the formation of groups actively engaged in looting, robbery and armed attacks can be observed in Tarkov, invariably coupled with violence against the civilian population and even military staff. Recently, these groups have earned a nickname from the locals - Scavs.

The Scav groups are quite varied, have diverse ethnic, social and quantitative composition, as well as the different levels and quality of equipment and varying degrees of sustainability. By far, three of these groups the are considered to be the most stable and organized. Namely: Y. G. Zhilnov group (alias - Yarik, Yaga), B.S. Pashutin group (alias - Fiend), B.T. Stoporenko group (alias - Lawyer).

Scavs are Tarkov locals who decided to walk the path of bandits. Essentially, a Scav is a side character which can deliver you an entirely different gameplay experience. Equipment, weapons, place and time of Scav spawning on location are set randomly. They can be recruited by players via the Hideout.

Scavs are both AI and player controlled characters. All maps begin with Scavs already populating them, and more will arrive in waves throughout the duration of a raid. During one of these spawn waves, player controlled Scavs will join the match. Scavs can spawn with random various pieces of equipment, and even have varying skill levels.

Playing as a Scav is like playing the game without rules, one where the players can experience quite different gameplay with a focus on reckless abandon. The Scav player is spawned together with AI Scavs - for example, in a locked spot on the map, in the middle of the time allocated for the raid. Scav tactics change up the overall style of raid gameplay, and in most cases, complicating the lives of BEAR and USEC players, while also fighting amongst themselves.

When you just join a raid as a scav, you are neutral with all AI scavs. That means they will not shoot or react in any way. However, if you attack a scav (Does not matter if AI or player) you become a "traitor" and all AI scavs will become hostile.
Note: You won't become a traitor if you kill a player scav who attacked you first.

Upgrading the Intelligence center in your Hideout will allow you to reduce the cooldown timer for your scav mode.

The most important thing about playing as Scav is that if you get killed in the raid, you will not lose anything from your main character's possessions, and if you survive, you can add whatever you looted to your stash.

In other words, this is an alternative way to find and save items and to take part in combat, but without constant fear of losing everything brought into the Raid.