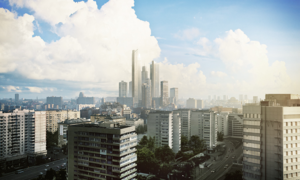 Tarkov is a city in the Russian Northwest, a municipal entity within Norvinsk region, and one of the two principal cities of the Norvinsk Special Economic Zone.

With each passing day the situation in the Norvinsk region grows more and more complicated. Incessant warfare in Tarkov has sparked massive panic; local populations flee the city, but those who stayed are looking to improve their fortunes at the expense of others. Having accepted the new reality, “savage” Tarkov locals--Scavs--flocked into well-armed gangs and started the re-division of the city. Nowadays, Tarkov is separated by unseen borders, controlled by different groups. Gain-greedy gunmen would go to any length to get their way, including murder of civilians and direct confrontation with the two private military companies.

The players will have to experience living in the skin of one of the mercenaries who survived the initial stage of the Tarkov conflict. After choosing one of the sides – USEC or BEAR – a player's character starts to make his way out of the city. Tarkov is sealed off by UN Peacekeepers and the Russian military, supply chains are cut, communication with operational command is lost, and in these conditions everyone has to make their own choices of what to do and how to get out of the chaos-ridden metropolis.

The city is located on the eastern shore of the shallow (max depth 2.5-3.5 m at 200 m from the shore) Lake Bay of the Gulf of Finland in the Baltic Sea. The coast is covered by a ridge of dunes and hills covered in vegetation, interrupted sometimes by river valleys, small lakes, ponds, and patches of exposed moraines. Sandy ("Golden") beach up to 50 m wide.

In the Paleozoic Era (300-400 million years ago) the entire area was covered by the sea. Sediments of the time — sand, sandy clay, clay with lenses of silt or peat — thickly covered (with over 200m of layers) a bedrock composed of granite, gneiss and diabases. Modern relief was formed as a result of the activities of the glacier (the latest Valdai glaciation that took place 12 thousand years ago). The retreating glacier formed the Littorina sea, whose level was at 7-9 m above the modern one. 4 thousand years ago the sea level dropped, and the shoals of the Gulf has turned into islands. Valley is formed with glaciolacustrine and postglacial sediments. Over the last 2.5 thousand years the relief stayed largely the same.

The Tarkov climate is temperate and humid, transitional from maritime to continental. The daytime length varies from 5:51 hrs on 22 December to 18:50 hrs June 22nd. The city area is characterized by frequent changes of air masses due to activities of the cyclones which pass along the Gulf which leads to great volatility of weather, especially in autumn and winter. Winters are mild, with moderately cold, mostly cloudy weather. Snow cover settles in the second half of November and lasts until mid-April. Spring is usually late and protracted. Summers are moderately warm, with roughly equivalently interchanging sunny and rainy days. Autumn is mostly overcast and foggy. Rainfall is about 650mm per year, mostly in June-August. The average annual relative humidity is about 80%, with highest in December (90%). Summer is dominated by Western and North-Western winds, and Western and South-Western in winter. The climate in Tarkov is close to that in Norvinsk. The Gulf of Finland, despite its shallowness, has some effect on the temperature profile of the city. In the summer, especially in August and September, mean air temperature is a bit higher than in Norvinsk (about 0.5-0.8°C higher), and lower in the winter (about 0.5-0.6°C lower). Also, winds are generally a bit more powerful on the coast as well.

Prior to the establishment of the city the area was covered with coniferous forests (pine and spruce) mixed with broadleaf species and lowland marshes. At the moment, the city vicinity has preserved large conifers (pine predominates) interchanging with deciduous groves (birch, alder, aspen, willow). Dominated by sandy soils, on lacustrine and alluvial sands - subaerial podzolic, in conjunction with peat - podzolic-Gley soils. The city vicinity is populated by the occasionally spotted foxes and muskrats. The city itself is home to large number of birds, reptiles and invertebrates.

The representative body of the local government - the Municipal Council — has been functioning since 1997. By the results of March 1, 2011 elections, a new staff filled the 4th convocation (of 22 delegates: 13 — from United Russia, 5 from Just Russia, 4 from the Communist Party, and 2 independent candidates). The Tarkov urban municipal district is lead by the Head (Mayor) of the municipal district. The executive and administrative body of the local government is represented by the local administration of the city of Tarkov.

The city is based on the hydronym Tarka, after the name of a river (38 km long, flows into the Gulf of Finland), which mouth is located in the East of the city.

The Coat of arms of the city[edit | edit source]

Crossed oak branch and caliper on the red field, with two waves in the bottom. The Oak Branch symbolizes the recreative park area, in which the city is located, while caliper denotes the primary focus of the industrial enterprises, and two waves are a symbol of the Gulf of Finland.

A major part of the long-distance commuting is directed to St. Petersburg, Sestroretsk and Norvinsk and divided by four traffic flows:

Today, Tarkov is abundant with objects of social and commercial infrastructure. The city is getting actively colonized by the major trade networks.

Tarkov is covered by all of the major cellular networks.

The educational and cultural services of Tarkov include the Central Library, Central children's library, the National Museum, and the Cultural Center of the city of Tarkov.

Educational institutions include: 9 secondary comprehensive schools, 12 kindergartens and nurseries, special (correctional) school No. 456, and the College of Economics and Management.