Trading will be a part of the dynamic economy in Escape from Tarkov, including rag fairs, auctions, and even the possibility to become a trader.

All traders in Escape from Tarkov (with the exception of Fence) offer items for Barter as opposed to buying the items with money alone. These trades often allow the player to obtain higher level gear at lower loyalty levels, or to trade a number of cheap items for a more valuable item to be used or sold at a profit. Most of these valuable trades are heavily limited per trader reset and often disappear (out of stock), so be sure to check in after reset for your favorite trades!

This trade is with Peacekeeper at LL1, you may exchange 8 of your brass-handled Bars A-2607 for 1 MP5

The Flea Market is a complete collection of all player and AI trader offered exchange deals. The system works on an offer basis, allowing each merchant to set up complex deals for others to take part in. 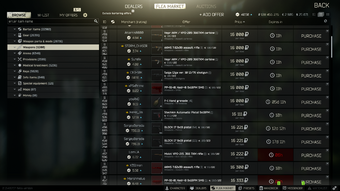 The market is accessible in the "Trading" menu via a tab situated at the top of the screen. Upon entering the Flea Market, the player is presented with a list of all available deals, set up by in-game merchant AI or players alike.

The market screen is also separated into 3 major sections: The "Browse" screen which is the main view described above, the "Wish List" screen (abbreviated "W-List") which shows all items the player wishes for (added with a right click to any item) and the "My Offers" screen which shows the players' current exchange deals.

At the top right of the screen, the player can choose the appearance of the list (currently not available), view his balance, reputation and a button which allows them to add an offer. 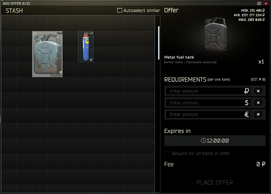 Offers are exchange deals established by players or AI merchants, these have one player switch items with another (or an AI trader). The system doesn't limit the players much, few guidelines being set, thus:

After achieving PMC level 10, the player can start adding their own offers on the market, offering any item they own in their stash (other than secure containers) for exchange with any item they have in their Handbook (examined items). Before creating an offer, a player must consider the following:

After an offer has been fulfilled, all proceeds will be mailed to the player via the in-game merchant "Ragman".

Each player has a reputation value (starting at 0.20) which affects their number of offers and the view other players have upon their offers.

Offer slots are increased upon reaching a certain reputation value and decreased upon dropping below it. All offer slot increase thresholds can be seen in the following table:

The fee you'll have to pay to post an offer on Flea Market is calculated using the following formula:

30% of this commission will be deducted if the player has constructed the level 3 Intelligence Center.

After this round the number, if it ends with a decimal point.