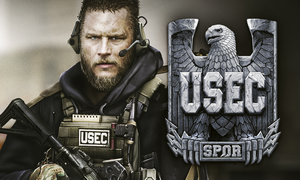 United Security (USEC), is a private military company (PMC) and one of the main factions in Escape from Tarkov. USEC is employed by the notorious Terra Group international corporation, vigorously engages in armed clashes, hindering the investigation of Terra Group activities, carried on by local authorities. Moreover, according to intelligence agencies, USEC provides armed cover to illegal work and research of the foreign company.

The USEC private military company was established in 1999 after the merger of two companies: KerniSEC and Safe Sea. In 2004, an agent of Terra Group international holding made contact with USEC, which have consecutively become, essentially, a private army of the holding, with offices all around the world and over 7500 strong of staff. Over the Contract Wars, the offshore-established PMC employed by Terra Group Labs as a security subcontractor was attempting to destroy the evidence of any potentially illicit activity of the employer and protect its property from being captured by BEAR, the PMC hired by the Russian government to investigate the Terra Group operations.